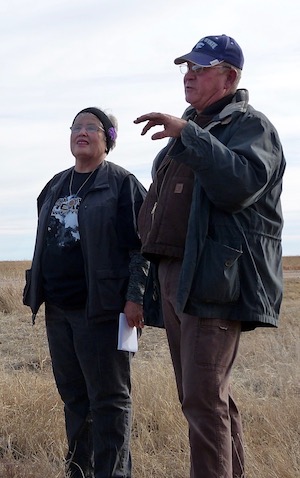 Vance and Louise Ehmke are happy to talk about playas, and they know what they’re talking about; there are approximately 80 playas, give or take a few, on their 10,000-acre farm in Lane County, Kansas. According to Vance, for every 1,000 acres of crop or rangeland, there’s about 40 acres of playa in there.

“From a farming point of view, playas are clearly the least profitable acres on the farm. These playa lakes are wetlands. Farming them gets you stuck out there, and you have crop failures. Every place we had wheat planted this year, the playa lakes were a complete loss because they flooded out,” explains Vance.

Playas—also called buffalo wallows, lagoons, and mud holes—are relatively small, round, shallow depressions found primarily in the western Great Plains. Their basins are lined with clay soil, which collects and holds water from rainfall and runoff, creating temporary lakes. In a wet spring, playas in agricultural fields usually flood out, resulting in crop failure. In the fall, when it’s very dry, the clay in the playa basin also makes it very hard to farm those areas.

“Years ago, it dawned on me, why knock my head against the wall?! Periodically, I had a real nice crop, but I mostly had a very high incidence of crop failure, or I couldn’t get a stand. It felt pretty good when I decided to quit farming those playas.”

For the past 15-20 years, the Ehmkes have been enrolling many of their playas in conservation programs, like the USDA Conservation Reserve Program (CRP). When many of their original CRP contracts expired and they couldn’t get those acres back into the program, Vance and Louise left the playas in grass, farmed around them, and started looking into other options.

Vance says their goal is to get all those playas back into a conservation program. “We’re constantly looking at the various programs to see if any of them will be a good fit or not.”

“We want to keep them, but it’s nice to have some help,” adds Louise. “It’s a good feeling doing it, but honestly it takes capital, some dollars, to keep playas out of production. You also get technical aid and advice on what you’re going to do and how to do it from Natural Resources Conservation Service. Yes, there are some hoops to jump through, but that’s part of getting the benefits.”

Earlier this year, the Ehmkes found the perfect fit when USDA announced a new CRP practice—the Migratory Bird State Acres for Wildlife Enhancement (SAFE), also known as CP38B—which provides a market-based financial incentive for restoring playas and planting a native grass buffer. Using a reverse auction, landowners submit an offer for the amount they are willing to accept as an annual payment for a period of 10–15 years. The bids are evaluated in a competitive process, with the lowest, most reasonable benefit-weighted bid amounts accepted.

Vance has nothing but praise for the new Migratory Bird SAFE: “Everything about this program is right. It’s a very well-designed program.”

During the first bidding period, the Ehmkes had 14 tracts, with a total of 15-20 playas on them, accepted into the program. That’s about 135-140 acres of playas, plus another 30 acres of buffer, according to Vance. And that’s just the beginning.

“Ultimately, we hope to get the rest of those playas into the program,” says Vance. “Playas are a real pain in the butt to farm. If you get them out of production, you just don’t have to worry about it.”

Practical and financial considerations were certainly a big part of the Ehmkes’ decision to stop farming playas, but that isn’t the first thing they mention when asked about this natural resource. Rather, you’ll hear phrases like “it makes us feel good,” “taking care of our furred and feathered friends,” and “making a contribution to maintaining the diversity of the area.”

Their biggest playa, which is about 125 acres in size, has been visited by many different groups, from school children to researchers. There’s even a viewing platform that visitors can climb to get a better view. It’s been about 10 years since the playa was full of water, but big rain events still bring water into the playa. This past April was one of those times, when heavy rains turned the playa into a marsh—and it came to life. According to Vance and Louise, the moisture brings many non-human visitors to the playa including frogs, ducks, geese, pelicans, cranes, egrets, herons, avocets, and fairy shrimp, those small invertebrates that provide food for the hungry birds.

When talking about this aspect of playas, Louise’s excitement is evident. “How cool it is to show that to your kids and the school kids that come for tours! They tend to think that nothing happens out on the plains, that it is just boring countryside. Then you educate and enlighten them about what’s going on and how the playa comes alive. It’s really neat to share that history and appreciation of the High Plains and to show them this ecosystem is just as important as anybody else’s.”

Their big playa has also been of great interest to various researchers over the years, from archeologists to hydrologists. A current multi-year study by the University of Kansas Department of Geography and Kansas Geological Society is looking at playas as a source of recharge to the High Plains (Ogallala) Aquifer. The approach, according to Bill Johnson, one of the lead researchers, is to evaluate aspects such as the playa water holding capacity (basin volume), infiltration capacity, and conductance of surface water through the unsaturated zone, which is about 13 meters or 42.6 feet.

“During our previous subsurface explorations using backhoe trenching and machine coring in playa basins in the region, we’ve seen visual evidence of downward water movement through the basin floor, as well as the basin edges, in the form of carbonate precipitated by the moving water,” explains Bill, “but our work at Ehmke playa is looking at recharge from the active or process perspective using above- and below-surface sensors.“

To do this, they have installed three groundwater monitoring wells equipped with a variety of instruments for measuring rainfall, surface water depth in the playa, wind direction and speed, humidity, temperature (air and soil surface), and groundwater chemistry. The monitoring wells and equipment were in place in time to collect data this spring when it was so wet, but it will still be some time before all the data are analyzed and the results are in.

Vance says they’ve been really blessed to have that big playa on their property. “We’ve had many, many, many people visit from all over the United States and other countries—scientists, archeologists, engineers, you name it—and we’ve learned a huge amount about our farm, how the soils originated, and the history of this area.”

“We have some fascinating stuff going on here in western Kansas,” adds Louise, “and we’re pretty significant. We should call this area Playa Lake Country!”

Read more about the Ehmkes experience with playas in Playas Bridge Generations and Cultures.